A concentrated blend of power, precision and functionality, the new Super Avenger Military chronograph by Breitling certainly lives up to its name. Its rugged steel case, water-resistant to 300 meters (1,000 ft), features an ultra-resistant carbon-based black coating.

The result is a non-reflective stealth look clearly geared up for the most extreme missions. The equally black dial provides a 24-hour “military time” display to avoid any potential confusion in the heat of action. The offroader strap is made of a durable and comfortable synthetic fabric such as those adopted for their operations by the elite armed forces. 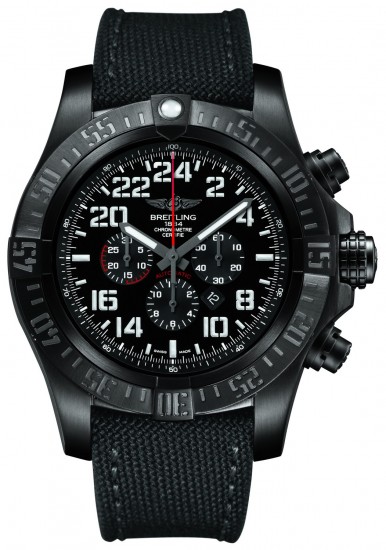 A true instrument for professionals, it is equipped with a selfwinding movement chronometer-certified by the COSC (Swiss Official Chronometer Testing Institute) – the highest official benchmark in terms of precision and reliability, as well as the only one based on an international norm. Super Avenger Military: an elite force on the wrist.