Casio announced today the release of its newest men’s outdoor watch within the PRO TREK line of watches – the PRW6000Y. Redefining tough, the PRW6000Y combines high performance, innovative functionality, and a comprehensive feature set that make it the ideal, go-anywhere men’s watch worthy of your off-road travels.

“Casio’s PRO TREK PRW6000Y does not skimp on features, as it will give you access to a range of data and stand up to the harshest of environments,” said David Johnson, vice president of Casio’s Timepiece Division. “The main appeal of the PRW6000Y is that you can grab it and go on any adventure, whether it’s a quick hike or a summer-long trek.” 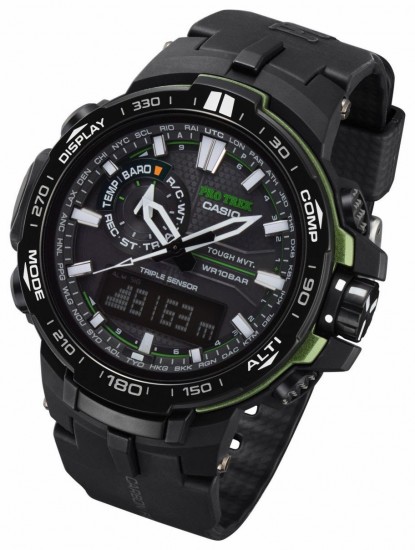 The benefit of the downsized sensor means it takes up only 5 percent of the space of the previous sensor and consumes only 10 percent of the energy, improving the resolution and frequency of altitude readings from 5m to 1m increments and from 5 seconds to 1 second respectively. This coupled with an increase in continuous compass measurements from 20 seconds to 60 seconds increases the accuracy and speed with which these features monitor nature’s elements and how they are utilized for high energy activities across the board.

The PRW6000Y is equipped with Casio’s Multi-Band 6 Atomic Timekeeping technology which alleviates concerns about changing the time for daylight saving time or leap years because it automatically synchronizes with atomic clocks in the US, Germany, the UK, China and two in Japan based on the user’s home city setting. The PRW6000Y also offers Casio’s Smart Access System, which provides fast, intuitive access to all of the key functions of the watch via an electronic crown. The crown can be pushed and turned to switch between individual modes and operate various functions, including the 1/100-second stopwatch, countdown timer, alarms and world time.

Another new feature in the PRW6000Y is an atmospheric pressure trend alarm that gives a notification in response to sudden swings in atmospheric pressure, to keep users constantly informed of the onset of rapidly changing weather conditions, which might otherwise be overlooked.

Designed with a carbon insert band, the PRW6000Y will be available in April at select jewelers and retailers nationwide for an MSRP of $600.