Casio is well-known for its innovative timepieces. In 2011, Casio announced its first G-SHOCK watch that uses Bluetooth v4.0 with low energy wireless technology to communicate with smartphones. Later models added compatibility with multiple major smartphone brands worldwide and offered various other new functions including notification of incoming calls and emails, as well as the ability to control a smartphone’s music player from the watch. 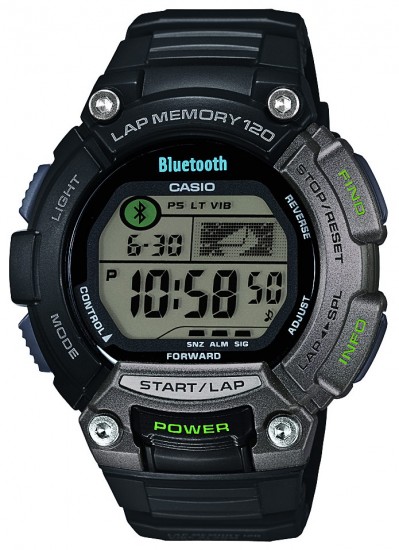 With the new STB-1000, Casio is extending iPhone compatibility, enabled through Bluetooth v4.0, to the sports watch category. It is compatible with four iPhone fitness apps: Abvio’s Runmeter, Walkmeter, and Cyclemeter (www.abvio.com), as well as Wahoo Fitness, all of which are available for download from the Apple App Store. The sports watch can be used to check personal fitness data such as running pace and distance, elapsed time, pulse, cycling speed, and pedal rotations. In addition to its fitness capabilities, the STB-1000 offers all of the essential functions of a timepiece that Casio fans have come to expect including time display, daily alarms and a countdown timer.

“This is an ideal sports watch for countless recreational runners who exercise with their iPhones,” said Shigenori Itoh, CEO of Casio America Inc. “In addition to the compatibility with several apps, it has a battery life up to two years and a versatile, water-proof design that makes it easy to use and wear before, during and after any workout.”

The sports watch can be used to check personal fitness data such as running pace and distance, elapsed time, pulse, cycling speed, and pedal rotations.

To make running more comfortable and enjoyable, the STB-1000 allows wearers to operate their iPhone music player without having to physically access the device. Wearers can easily play or stop songs using the watch buttons, while also adjusting the volume or advancing a track. The watch itself (without an iPhone) also offers a wide range of other sports watch functions including recording up to 120 lap times.