Casio, once again combined technology and functionality with style through the introduction of their latest G-Shock, the GD350. This new G-Shock was engineered for those special secret missions that demand precision and stealth. The countdown timer function has a large, easily identifiable button for direct access and sure operation under the toughest of conditions.

When the GD350 timer reaches the end of its countdown, alerts are issued by either a vibration or a tone plus LED flash operation. The large face of the GD350 is configured to ensure that the countdown timer is easily seen in the dark. A high luminance LED can be configured to light up for one, three, or five seconds, and an Auto Light feature causes the face to illuminate whenever the watch is tilted towards the face for reading. The special shock absorber design of the back of the watch helps to ensure that vibrations are felt when it is worn. 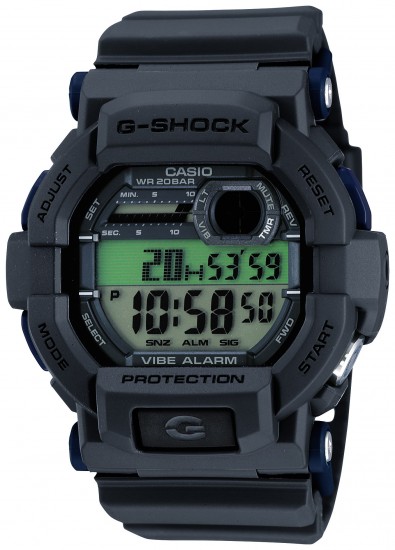 “We are pleased to introduce a new design approach to our Timer and Alert Functions” Said Shigenori Itoh, Chairman and CEO of Casio America Inc. “The GD350 is not only resilient to withstand the rigors of harsh environments as well as underwater conditions, now our latest G-Shock has been reinforced to protect the sound and vibration functions.”

The GD350 will retail for $120 and is available this March at select Macy’s and Bloomingdales stores, fashion boutiques, key jewelry stores, and www.gshock.com