Citizen proudly announces the Eco-Drive Altichron Cirrus. This newest watch in the Promaster line features dual sensors for an electronic compass and altimeter. It will launch in mid May 2014, and will be available in two designs — titanium and pearl-white titanium. Promaster is Citizen’s world-renowned brand long held in the highest regard by professionals for supreme durability, superior functionality, as well as the ability to capture the imagination.

First marketed in 1989, the original Altichron was a groundbreaking Citizen watch featuring superior altimeter functions that became one of the hallmark models of the Promaster brand. This new model builds on the ALTICRHON tradition, adding the latest Citizen technologies, such as Eco-Drive technology that powers the watch using any light source. These enhancements along with a sophisticated design that plays to the wearer’s spirit of adventure — which won the Good Design Award 2013 — make this watch worthy as a Citizen flagship model. 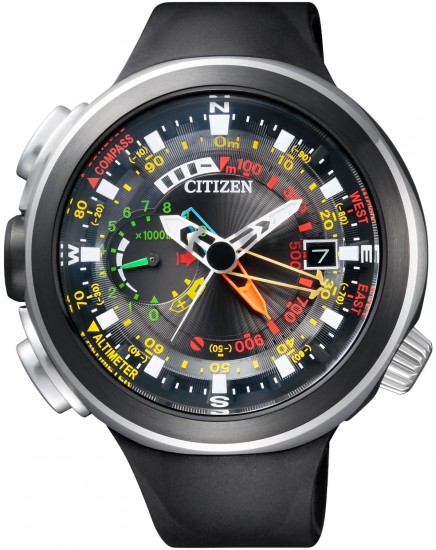 The altitude and depth measuring capability reaches as much as 10,000 meters, higher than any mountain on the planet, and as deep as 300 meters below sea level. Rather than displayed digitally in an LCD, all the information regarding altitude or direction is shown as an analog representation, making it possible to keep time display as the main function. The color and shape of the hands are designed to make it easy for a wearer to read multiple types of information at a glance. For example, colors for indexes on the dial and hand are coded by function. In spite of its sophisticated capability to display a complex array of information, once a user understands how to read the watch operation becomes very easy.

A striking three-dimensional sense of depth makes the dial look even more captivating. Inside you can clearly see floating indexes and the hands beneath the transparent dial, suggesting sky with clouds floating at different heights above land. At first glance the watch resembles aircraft and helicopters ascending to greater heights. The rounded streamline design of the case simulates jet streams and the arc of the earth seen from the great heights. The overall allure of this watch comes from the image of high altitude and the sky in its details. All of this combines to embody the liberation you feel when you venture wherever your imagination takes you.

These enhancements along with a sophisticated design that plays to the wearer’s spirit of adventure — which won the Good Design Award 2013 — make this watch worthy as a Citizen flagship model.

Since 1989, Promaster has been highly acclaimed for its supreme durability in even the harshest environments and for its superior functionality in a wide variety of specialized fields. It has been categorized as “LAND” for climbing mountains, “MARINE” for diving into the sea, and “SKY” for flying in the sky. Each category prepares three levels as Standard, Expert and Premier to meet the demands of all types of users from beginners to professionals. From 2013, the renewed Promaster extends its bold legend by infusing “imagination” into its persona, reflecting aspirations toward exploring infinite new territories.

*DLC (Diamond Like Carbon): Coated with an amorphous carbon film that is nearly as hard as diamond.