For decades, the Calatrava – the prototype of the classic round wristwatch, including its Officer's- style variations with dust covers over the case back – has ranked among the most iconic creations of Patek Philippe. Uniting the key characteristics of this watch family, the new Calatrava Ref. 5227 now features a display back protected with a separate dust cover. The special twist: The entire hinge is on the inside of the cover, making it invisible even to the connoisseur.

At Patek Philippe, designing and crafting cases has always been just as important as caliber engineering, which for most people is the essence of watchmaking. So it is not surprising that the manufacture has had its own casemaking department for decades and masters all disciplines in this domain from the very first sketches to the flawlessly polished cases, including the diamond-set versions. The case blanks – solid gold, platinum, or stainless steel – are crafted with traditional cold-forming techniques in high-tonnage hydraulic presses using precision dies also made in-house. 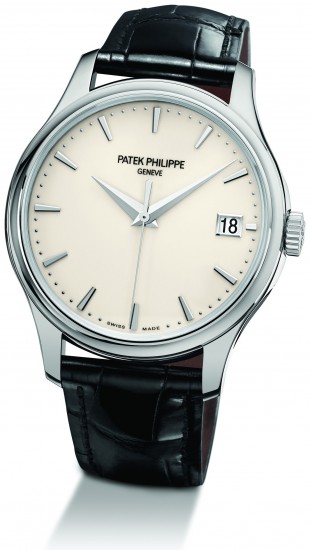 The fine hinges of the dust covers fitted to the coveted Officer's-style watches are also crafted in this department, partly with high-tech production resources, but mostly by hand, then adjusted to fractions of a millimeter and assembled to perfection. Accordingly, Patek Philippe's casemakers were motivated by the assignment of designing a Calatrava case featuring a dust cover to be attached to the sapphire-crystal case back of the watch with an invisible hinge. They mastered the task with bravura.

A close look at the new Calatrava Ref. 5227 from all angles with a loupe reveals that this watch can only be a Patek Philippe. Not only because it is a Calatrava, but also because of its finesse and abundance of fascinating details for which the manufacture is acclaimed. The family-owned enterprise enjoys total creative freedom in designing new models, which always involves certain imponderables as well. This is especially true because new watches must fulfill the strict directives of the Patek Philippe Seal. The Stern family, whose tradition is intimately intertwined with the Calatrava collection, has the sole and final say on whether the challenge of creating a new watch is worth taking on. The Sterns acquired the manufacture in 1932, and the first Calatrava model, the Ref. 96, was launched in the same year. Since then, Patek Philippe repeatedly demonstrated that even a paragon of design like the Calatrava can be changed, optimized, and perfected.

The Fine Art Of Casemaking

It is in the nature of consummately designed cases that they conceal the profound creative thrust, the extreme technical sophistication, and the artisanal talent involved in their making. The classic round 39-mm case of the Calatrava Ref. 5227, a typical representative of its family with a concave bezel, gently curved lugs, and slender silhouette, is a fine example. But the fact that a 9.24-mm thin watch can have a sapphire-crystal case back plus a hinged dust cover reflects extreme craftsmanship and ingenuity. The small lip that allows the dust cover to be opened can hardly be discerned. However, the hinge with which it is attached to the case remains invisible while the watch is on the wrist. It can only be seen close up when the cover is open, be it to read an engraved dedication or to admire the unique artisanal finishes of the self-winding manufacture movement.

Accordingly, Patek Philippe's casemakers were motivated by the assignment of designing a Calatrava case featuring a dust cover to be attached to the sapphire-crystal case back of the watch with an invisible hinge.

Now, it becomes clear that this hinge alone requires the utmost in craftsmanship as well as precision fitting of the hinge elements to the dust cover and the case. Additionally, the dust cover must be manually adjusted relative to the display back to assure that it closes nearly seamlessly with a smooth click. But the new Calatrava case has another exclusive feature. Viewed from the side, it flaunts the extended, gently curved flutes sculpted from the case flank into the lugs. They add a touch of verve to the case, emphasize its elegant silhouette, and make it appear even more lissome. Each of these flutes is worked into the solid gold case and then, as all other case parts, manually polished to a mirror sheen. This considerable extra effort is eagerly invested by Patek Philippe because it accentuates the charisma of the new Calatrava Ref. 5227.

A Tribute To Time

The perimeter of the bezel is concave as well, creating an eloquent frame for the sleek, uncluttered dial of the new Ref. 5227. Like the case itself, it exemplifies the timeless Bauhaus philosophy, which says that form follows function. It has a cream-colored lacquer surface and focuses on the essence.

Applied trapezoidal markers in gold stand for the hours, dainty golden dots form the minute circle, and the aperture date is presented at 3 o'clock in a polished gold frame. Two pointed and faceted Dauphine hands in gold for the hours and minutes as well as a slender, counterbalanced seconds hand occupy this graceful stage. All these elements are protected by a slightly cambered sapphire- crystal glass.

The case back beneath the dust cover has a sapphire-crystal window as well to reveal the beautiful movement within. It is the self-winding caliber 324 SC, widely admired in the world of horology. Its large four-arm Gyromax balance with a Spiromax balance spring made of Silinvar beats at a frequency of 28,800 semi-oscillations per hour (4 Hz) to assure the rate accuracy specified by the Patek Philippe Seal, within the narrow tolerance range of -3 to +2 seconds per day. And like all movements crafted at the workshops in Geneva, it epitomizes perfection in finissage, which even today is largely performed by hand: from round chamfered and polished bridge edges to Geneva striping, from gold-filled engravings to circular graining and the Calatrava cross that adorns the winding rotor. It is made of solid 21K gold to extract as much winding energy as possible from even the slightest motions of the wrist.

Yet again, 81 years after the debut of the Calatrava, Patek Philippe reasserts the timeless quality of this legendary watch collection as well as the creativity of the manufacture in leveraging its traditions and heritage. The new Ref. 5227 enhances the endearingly elegant Calatrava style with the flair of a perfectly integrated dust cover. It is available in 18K yellow, white, or rose (5N) gold and worn on a hand-stitched alligator strap with large square scales and a matching gold prong buckle. The strap is shiny black for the white-gold model, shiny chocolate brown for the yellow-gold version, and shiny dark brown for the model in rose gold.