TOURNEAU has announced its support of the fight against AIDS through a multi-level partnership with the (RED) Campaign. The company has unveiled two very special TOURNEAU (RED) watches available in stores nationwide as of today, with a percentage of proceeds donated to The Global Fund to fight AIDS, Tuberculosis and Malaria.  The limited edition watches will feature the highest quality of Swiss craftsmanship and the Campaign's signature red color signifying TOURNEAU's commitment to making a global impact on ending these diseases.

The watches will be available in two sizes, a 40mm model and a smaller 35mm model.  The 40mm style features an automatic movement, stainless steel case, black dial with red numerals, and a black crocodile strap with red accent stitching.  The 35mm model features a quartz movement, stainless steel case, a black dial with red numerals, and a red crocodile strap.  Both models have the (RED) logo printed on the decorated back case. 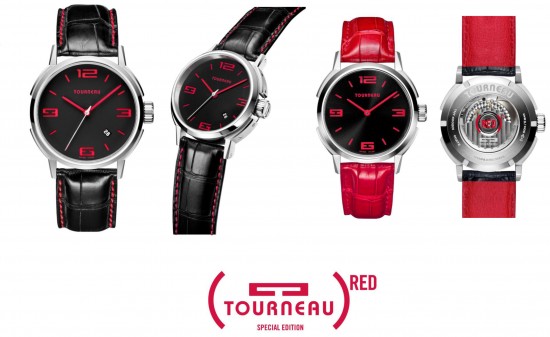 In addition, TOURNEAU recently sponsored the (RED) Rush to Zero Campaign, a compilation of exciting fundraising events held June 1-10, 2012., that included a European vintage road race.  TOURNEAU showed its support for the Cash & Rocket (RED) Road Tour from London to Monte Carlo, showcasing women-driven vintage and classic cars.  The Road Tour ended with an auction held in Monte Carlo where the premiere two TOURNEAU RED watches were auctioned to the highest bidders with all proceeds donated to The Global Fund.

"It is an honor for TOURNEAU to partner with (RED) and we are proud to debut these two very special timepieces that will serve as a lasting reminder of the importance of the fight against AIDS," said TOURNEAU CEO, Jim Seuss.  "The (RED) Foundation is unparalleled in its devotion to this worthy cause, and TOURNEAU is grateful for the opportunity to make a significant impact through support of The Global Fund to fight AIDS, Tuberculosis and Malaria."