On Thursday, September 27, 2012, the Seiko Salon in Tokyo opened its doors as usual, but visitors were greeted with a dramatic new display, featuring the new Seiko Astron GPS Solar. The center window of the Seiko Salon in Tokyo’s landmark Wako store in Ginza featured a huge montage of images displayed on about 50 screens, all showing the new Seiko Astron and its remarkable functionality. In addition, the store’s famous clock tower was lit up in blue, symbolizing the global reach of Astron’s astonishing GPS technology, extending to every corner of our planet, with its deep blue colour as seen from space. 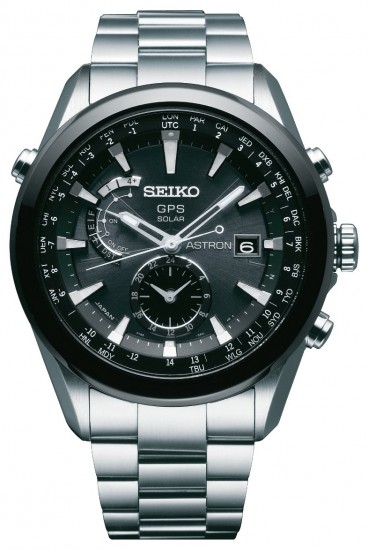 October 10, 2012, sees the international launch of the new Seiko Astron at the Royal Greenwich Observatory, a setting steeped in horological history. Just as the Harrison chronometers that are housed at the Observatory set a new standard of precision and made international travel so much safer, so the new Seiko Astron redefines modern timekeeping by adjusting to every time zone on earth.

The new Seiko Astron has pride of place in the main window of the Seiko Salon at Wako, Tokyo’s leading specialty retailer.

Just as the Harrison chronometers that are housed at the Observatory set a new standard of precision and made international travel so much safer, so the new Seiko Astron redefines modern timekeeping by adjusting to every time zone on earth.

A New Revolution In Time.

The new Seiko Astron is the world’s first GPS solar watch. It requires no external power source and is entirely self-sustaining. Using just the power of light, it connects to the GPS network, and tells time with atomic clock precision, adjusting at the touch of a button to all 39 time zones on earth. It took almost 10 years to create the new Seiko Astron and to package its advanced functionality in a watch that is beautiful to look at and comfortable to wear. Like its illustrious predecessor, the 1969 first quartz watch, the new Astron GPS Solar will change the way that the world tells time. To develop Astron, Seiko developed several new technologies and over 100 patent applications have been filed. Only Seiko can deliver what the international traveler has long wanted, a watch that understands and adjusts to time zones.

The Advances That Have Turned Seiko Astron From Dream To Reality.

Seiko Astron In The Watch Universe

The new Seiko Astron collection is being presented in many of the world’s leading retail outlets including the Seiko Centers in Tokyo, Paris, Amsterdam, Hong Kong and elsewhere. After its highly successful presentation at Baselworld, Astron is being marketed this year in over 50 markets of the world and its distribution will increase further in 2013 as production capacity increases. In 1969, the Quartz Astron ushered in a new era in watchmaking. Today, the second Astron revolution is under way.