From its first launch in 2009, the Japanese inspiration of the Ananta design has captured the imagination of watch enthusiasts throughout the world. With its sword-shaped Katana profile and the super-flat Zaratsu polishing, Ananta has carved out a distinctively Japanese position in the luxury watch market. 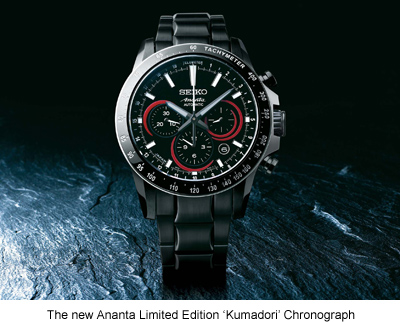 The Art Of ‘Kumadori’ And Kabuki

From modest beginnings in 17th century Kyoto, Kabuki theater has grown to become one of the most distinctive and popular aspects of Japan’s culture. With its highly stylish sets and costumes, its ritualised dancing and declaratory style of acting, today’s Kabuki reaches back into Japan’s ancient traditions. ‘Kumadori’ is an art within an art; all the actors on the Kabuki stage wear an elaborate form of make-up which accentuates their emotions with dramatically exaggerated lines and vivid colors. It is this art of ‘Kumadori’ that has inspired the new Ananta chronograph.

The dial is painted by hand with pure black lacquer by Isshu Tamura, a noted and expert lacquer artist.

This remarkable watch unites several different aspects of Japan’s rich heritage. The watch itself is a mechanical chronograph, using Seiko’s celebrated 8R28 caliber which has, of course, a column wheel and vertical clutch system for precise chronograph operation, and incorporates Seiko’s unique three-pointed hammer which ensures the perfect synchronization of the hands’ fly-back.

The uniqueness of this chronograph lies in the lacquer dial. The dial is painted by hand with pure black lacquer by Isshu Tamura, a noted and expert lacquer artist. Tamura is a master of the Kaga Makie style and paints the dials in his studio in Kanazawa on the western shores of the Japanese mainland. Once the black dial is painted, the red inner rings, also in lacquer, are applied.

The effect is startling - the jet black of the lacquer dial is as deep as the night sky, making the red highlights stand out in sharp relief – a look that is as dramatic as Kumadori itself. This unusual and highly collectable piece is offered in a Limited Edition of 800, each with its individual serial number engraved on the case back.