SEIKO is proud to introduce three limited edition Grand Seiko timepieces as a part of the SEIKO 130th Anniversary Commemorative Collection. All three models house a newly developed mechanical hand-winding movement, Caliber 9S64, which boasts a 3-day power reserve and is used exclusively for Grand Seiko. The design pays faithful homage to the much coveted original Grand Seiko model from 1960. 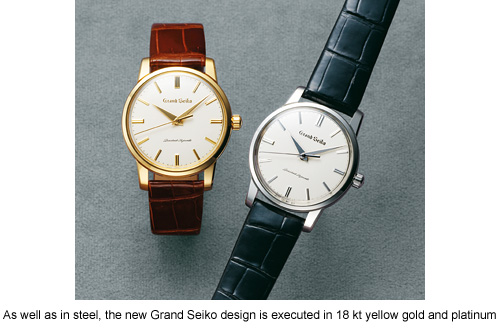 For 50 years, the idea behind Grand Seiko has remained the same. It is a deceptively simple idea; each Grand Seiko watch should be as accurate, legible, durable and easy to wear as possible. Nothing more and nothing less. In pursuit of this ideal, the Grand Seiko watchmakers utilize the very best movements, materials and craftsmanship to create, by hand, watches that are in their simple sophistication, perfect expressions of all that is essential in a wrist watch. Until last year, Grand Seiko was available only in Japan and a very limited number of retail locations elsewhere, but now watch connoisseurs in over 20 major countries are discovering the functional beauty and the design purity of Grand Seiko.

The Grand Seiko name on the dial and buckle is exactly as it was on the very first 1960 Grand Seiko watch and the celebrated ‘lion’ symbol adorns the case back.

The caliber, 9S64, is entirely new. Like the original 1960 model, it is a mechanical hand-winding movement but its outstanding performance is the result of the very latest in high-technology watchmaking. It delivers a 3-day power reserve, thanks to the use of a thinner and longer mainspring made of SEIKO’s proprietary alloy “SPRON510”. In addition, the balance spring is made of another recently developed highly shock resistant and anti-magnetic alloy “SPRON610” and the caliber uses a new escape wheel and pallet manufactured by MEMS*. These new components contribute to its reliable and precise performance; its timekeeping precision is -3 to +5 seconds per day**, a level that is confirmed in every case by testing to the very exacting Grand Seiko standard, the highest published standard in the industry. 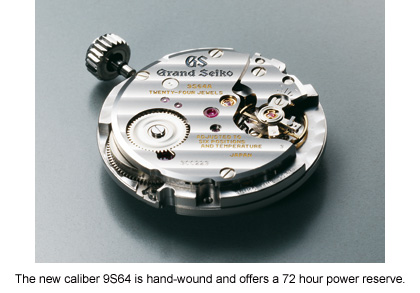 The cases, whether steel, 18 karat gold or platinum, are polished by hand, using SEIKO’s special Zaratsu technique*** and the high-definition dual-curved sapphire crystals have an anti-reflective coating to give the watch the distinctive Grand Seiko sparkle of quality. The Grand Seiko name on the dial and buckle is exactly as it was on the very first 1960 Grand Seiko watch and the celebrated ‘lion’ symbol adorns the case back.

In honor of the 130th anniversary of SEIKO, the gold and platinum versions are offered in a limited edition of just 130, while the steel execution edition is of 1,300.